Exhaustive research carried out by a team of researchers led by Prof. T. Pradeep from the Department of Chemistry at the Indian Institute of Technology (IIT) Madras, spread over four years, has put to rest the scepticism about the merits of the arsenic water filter developed by them. The water filter has been in operation for three and half years in about 900 sites in India, serving close to 400,000 people.

Arsenic in drinking water is the largest natural mass poisoning in the history of humanity, affecting 13 crore people globally. The problem of arsenic in the environment, known for over 1,002 years, has not been solved satisfactorily, due to the non-availability of appropriate and affordable materials. Arsenic is a slow poison, causing numerous adverse health effects, including cancer and genetic anomalies.

The technology developed at IIT makes use of confined metastable 2-line iron oxyhydroxides and its large adsorption capacity to remove arsenic in two different dissolved forms (arsenate and arsenite). The filter was able to reduce the arsenic concentration in the water from 200 ppb (parts per billion) to well below the WHO limit of 10 ppb. The results were published recently in the journal Advanced Materials.

The team mimicked the average arsenic concentration seen in West Bengal — 200 ppb of arsenic - for carrying out several laboratory studies. Though studies were carried out at a pH of 7.8, the team found the adsorption capacity of the filter was not compromised in the pH range 4 to 10.

Once the filter has reached its saturation limit it has to be reactivated or recharged with new material.

Reactivation is done by soaking the material in sodium sulphate solution for an hour at room temperature. It is further incubated for about four hours after reducing the pH to 4. Using this reactivation protocol the same filter can be reused seven times.

Studies were carried out to test if the adsorbed arsenic leached from the filter. The team found that the amount of arsenic that got leached was 1 ppb in the case of arsenite and 2 ppb for arsenate.

Works for a total of 143 nos. of Community Water Treatment Plants is under progress. Out of these, 96 nos. of plants has been taken up under NITI Aayog and 41 under NRDWP. 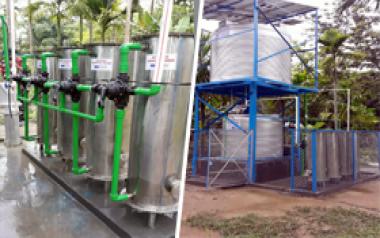