Public Health Engineering Department was created in 1956. The department is entrusted with the responsibility of providing safe drinking water and sanitation facilities in rural areas of Assam.

A block is an administrative entity. The jurisdiction is generally limited to rural parts of a district. There is usually more than one block within a district.

What is Gram Panchayat?

A village is a clustered human settlement or community, usually larger than a habitation with the population ranging from a few hundred to a few thousand (sometimes tens of thousands). Historically, in India, villages were a usual form of community for societies that depend on agriculture for subsistence.

It is a term used to define a group of families living in proximity to each other, within a village. It could have either heterogeneous or homogenous demographic pattern. There can be more than one habitation in a village but not vice versa. What does Habitation Coverage status means?

Quality Affected Habitations (QA) - These are the habitations where water samples tested in laboratories have indicated levels of chemical contamination (limited to Arsenic, Fluoride, Iron, Nitrate and Salinity) higher than the permissible limits set by the Bureau of Indian Standards (BIS). Special focus is laid on monitoring of coverage status of such habitations under NRDWP.

This definition has been adopted by the Ministry of Drinking Water & Sanitation for purposes of monitoring theimplementation of NRDWP.

What is financial Year?

Such water supply systems provide water to various Delivery points away from the source of water through a pumping or gravity system and connections through pipelines. What is Spot Source?

Those water supply systems where the source of water and the supply/delivery system are both at the same point location, are called spot sources. Eg. Hand humps, wells, ponds etc. This programme was launched in April 2009 by the then Department of Drinking Water and Sanitation presently Ministry of Drinking Water and Sanitation, for assisting states in providing drinking water to the rural population of India. This programme has been emphasizing on water supply systems which are planned and managed by the community at the village level, for ensuring sustainable drinking water availability, convenient delivery systems and achieving water security at the household level.

Programme Activity may be sub-divided into:

Norms of Water Supply under NRDWP 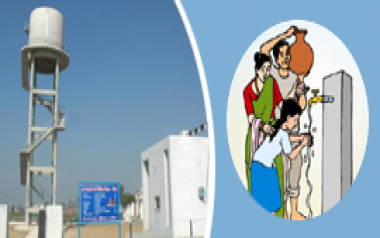